Posted on September 20, 2017 by thinkpixblog

Michael Jackson sang that it was easy but for some of us, learning our ‘a,b,c’s’ feels impossible. Moreover, as everyone else is ‘getting it’; how does that feel for a young learner?

One of the key components of any SpLD intervention is the ‘alphabet arc’. Why? 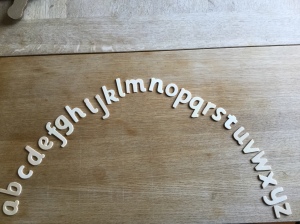 Something that dyslexics typically do not grasp, without instruction, is that letters have a name and sound – of course they do!

In order to acquire this understanding, dyslexic children need to experience the alphabet, so that it becomes less abstract. This is essentially how dyslexics can thrive in all areas of learning. Their minds are apt to rotate abstract concepts, to take 360 views and see all possibilities. Simply saying this is ‘a’ because this is ‘a’ does not cut it!! They have to experience something; using their senses, which is where the multi-sensory learning comes in.

Cognitive Load Theory and Working Memory limitations are big topics in education. By taking in information via Primary biological information i.e. our senses; this decreases the load on Working Memory. It is more of an evolutionary approach to learning, information that just couldn’t be processed before, gets transferred to Long Term Memory!

The alphabet arc is simply, as it says on the tin, alphabet letters arranged in order of the alphabet, in the shape of an arc.

So often, when I’m teaching the alphabet arc, students will say .

Encourage them to close that 3D, spatial thinking down – it is not going to help them in this task!

A few months ago, my eight year old was sitting on the bed (between there and the bath we have our BEST chats).

Me: ‘What do you mean?’, …unsure whether he needed the loo. (I always answer a question with a question, as it’s usually just ‘wondering out loud’ and he has the answer).

Aaaaah, he didn’t understand the ‘Alphabetic Principle’, the fact that letters have names and sounds.

So, what is the Alphabet Arc anyway?

Using wooden, or plastic letters, the pupil is asked to arrange the alphabet in an arc on the desk or table in front of them, with ‘m,n’ in the middle.

There are many versions of letters available: magnetic, coloured, tactile, plain. It might be easier to start with coloured letters and progress to plain wood. With the plain ones, pupils find it harder to remember letter orientation, therefore there is greater challenge.

How can you help your students acquire this knowledge?

In this way, pupils are using their sense of touch, they are saying the names and sounds and hearing them. Have a mirror handy so that they can see the sounds being made from the lips and teeth and encourage them to feel them too: air, vibrations, movements of the tongue.

Things to look out for and address:

Look here for my video for Nexus Education:

Understanding the power of the dyslexic mind and the alphabet.

In a brilliant exhibition at the Smithsonian, dyslexic graphic designer, Madalyn Hymas, showed how 6 letters can make 48 words. You start to appreciate how confusing the alphabet is for a mind that sees endless possibilities!

← Dyslexia: Finding the elephant in the classroom.
Dyslexia: start a discussion →